Youth leading to the way to peace PEACE CAMP 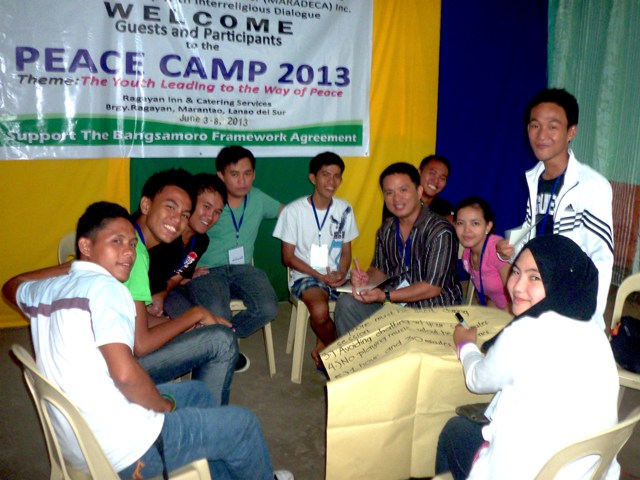 “Youth is the hope of the nation”, as believed some development workers.  As part of the project entitled” Strengthening Grassroots in Interfaith Dialogue and Understanding”, a five-day peace camp was conducted on June 3-8, 2013 in two venues:  first at the MARADECA quadrangle office at Barangay Ragayan, Marantao, Lanao del Sur, and followed by an activity at Dapit Alim in Tubod, Lanao del Norte with the theme “Youth leading to the way to peace”.

It was facilitated in partnership with Inter-Religious Dialogue Diocese (IRDD—a non-government organization based in Iligan city that supports interfaith and peace activities. The peace camp was participated by forty-two (42) Muslim, Christian and Indigenous young people from different municipalities of Lanao del Sur and Lanao Norte, composed of 18 males and 14 females.

The event was graced by the presence of various concerned individuals who shared their wisdom and expertise about the concept of peace, history of conflict in Mindanao and the framework agreement of Bangsamoro.  The resource persons were Prof. Salipada Tamano of the Bishop-Ulama Council (BUC), Prof. Jane Aspiren and Mr, Musa Sanguila from PAKIGDAIT based in Iligan City.   Rev Fr. Dong Galenzoga and MARADECA Executive Director Salic Ibrahim were also present.

During the training, one of the Muslim participants shared her reflections that “respect and understanding is an instrument of harmonious relationship with the other culture.”  For the Christian youth, one of them expressed that “I had gained better understanding about Framework Agreement of Bangsamoro (FAB), and it is now my advocacy to make the people around me understood the concept”.

The peace camp was a learning and fun-filled experience for the participants. At the end of the peace camp, the youth had learned about inner peace as a starting tone of peace, gained better understanding about the concept of peace and conflict in Mindanao. It also raised their awareness about the aspirations of the Muslim and indigenous peoples.