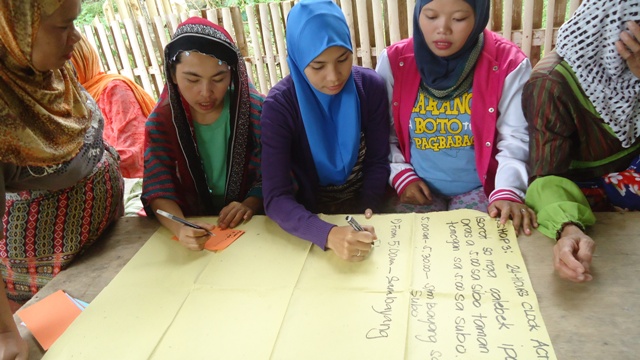 A training that requires workshops and processing has raised the need to widen the outreach of mainstreaming gender issues in the community to prevent further problems related to misunderstanding about each other’s gender issues.

The Enterprise Development is a program of MARADECA.

A third training was held in Barangay Sandab in the town of Butig on September 29-30 and had the most participation,  by three men and 52 women.

The training was represented by Ompongan o mga Bae sa Ranao (OBAERA) and Ompongan O MgaTaribasok Sa Ranao (OTR) and their organized communities. It aimed to popularize gender issues in the communities and wanted to help address issues and concerns of men, women, boys and girls.

The trainings hoped that in all programs, activities and interventions in the community by nongovernment organizations and civil society organizations, “no one would be excluded as part of the development process”.

“This is also a good strategy in making women and men’s concerns and experiences be an integral part in the planning, designing, implementation, monitoring and evaluation of policies and programs in all political, economic and social spheres so that inequality between men and women are not perpetuated,” the Enterprise Development said.

The training was a participatory approach “that ensures high participation of attendees”. There were workshops, inputs and processing afterwards to ensure that lessons were properly understood.

The training has also become venue for participants to raise and express their ideas and opinions regarding gender issues and concerns that bring them hope for development.

”Gender issues must be addressed because if not it will become a problem over a period of time and if this remains a problem is creates more problems that makes us more under developed. That’s why the importance of gender is very significant that everyone should understand it,” one participant said.