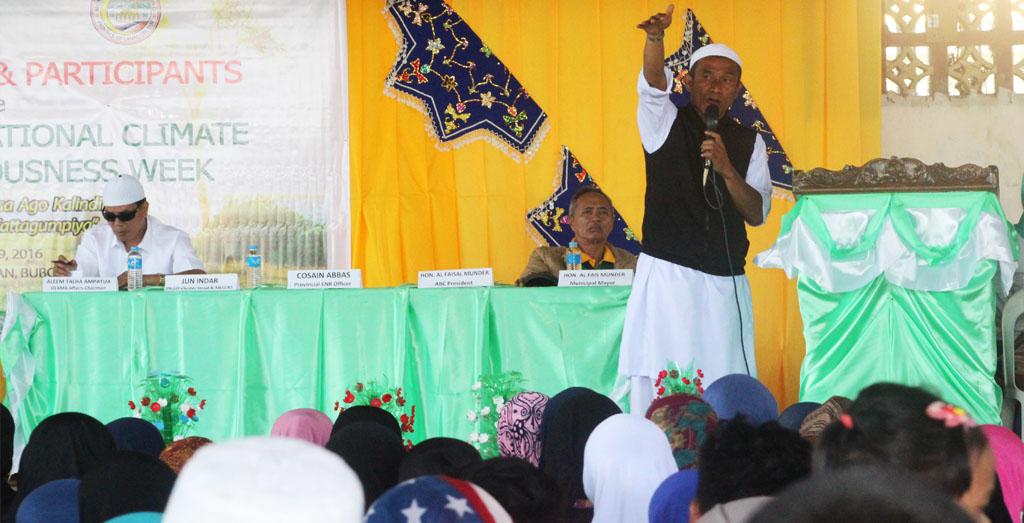 Different private sectors have gathered to attend the two-day discussion regarding climate change in coordination with the local government of Bubong and Lanao Del Sur. The talks took place last November 28-29, 2016 held at the public gymnasium of Bubong, Lanao Del Sur. The activity started with a “Walk for Green” parade around the municipality for its first day and a tree planting for the second day also in the same place. The aim of the event is to strengthen the awareness of the people about the climate change and learn it effects to everybody. It was to show support for the “Green Bubong” and “Reforestation in Bubong” programs.

One of the invited resource person is Mr. Cosain Abbas, Provincial Environment and Natural Resources Officer of Lanao del Sur. He talked about the relationship of human and the environment, he said “we humans should understand and respect the nature because our relationship is very important. We benefit from each other.”

He stated that “human need more trees for survival and also likewise with the environment.” Several personalities were also present in the said event like Aleem Talha Ampatua and Al-Faisal Munder, the ABC president of Bubong. The activity was conducted in line with the observance of Climate Change Consciousness which was implemented by the

Department of Environment and Natural Resources together with the local government of Bubong, Lanao Del Sur. The event was facilitated by the Maranao People Development (MARADECA) Inc. with the support of CARITAS Australia. Several people’s organizations have also participated like the OBAERA, OTR AND MYPD.

Another important activity of the event was the tree planting at Bubong. It was called “Gadong Tano”, a Maranao term which means “Let’s Go Green”. The tree planting activity has made the participants plant about 500 Mahogany seedlings in the six (6) different barangays of Bubong, Lanao Del Sur. These kinds of activities have encouraged the stakeholders into taking care of the environment; they are now well-aware of the consequences if the environment is taken for granted.