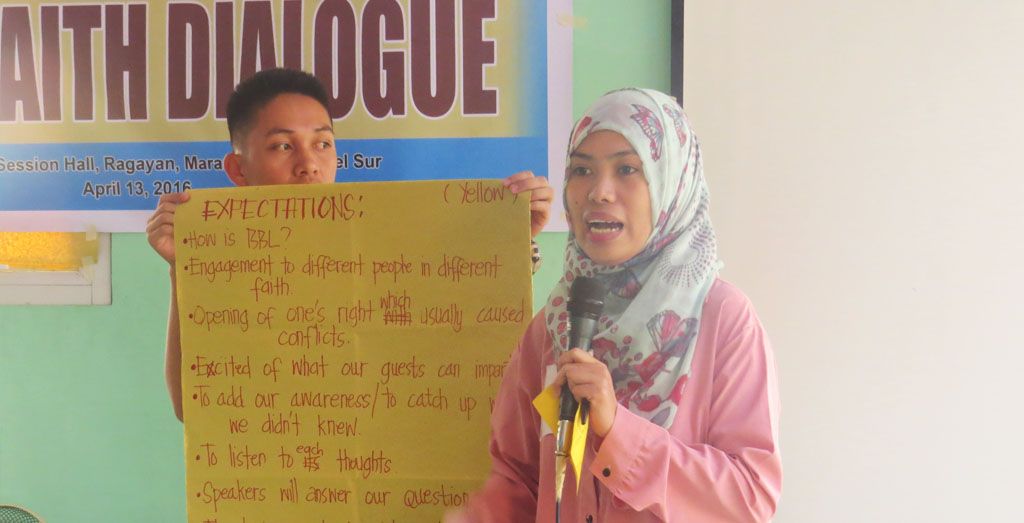 Biases and stereotyping were discussed and evaluated anew in an interfaith meeting in Marawi City. The meeting was participated in by the different delegates who were Muslims and Catholics. In the meeting, both sides have shared their perspectives regarding each others’ views and beliefs.

Participants also talked about the tensions they feel while living with people who have different religions and beliefs. “Muslims are being generalized as terrorists regardless of the tribes and countries they belong with,” it was noted.

“Once labeled as Muslim or even looked like a Muslim people will jump into conclusion that you are a terrorist,” according to Aleem Habib Sharief, one of the participants of the Interfaith Dialogue held last April 2016. He also pointed out the misunderstandings and misconceptions about Islam which is always connected to terrorism but on the contrary of that, the word Islam means “peace”.  He added that terrorism is not in the teachings of Islam.

A Catholic participant also shared that he felt intimated as a Catholic living in Marawi City because they are a minority in the said place.  Fr. Chito Suganub, the Catholic Vicar General in Marawi City and Interfaith dialogue director said, “biases and prejudices between Muslims and Christians started during the colonization of the Philippines by the Spaniards.” He added, “it is not in the doctrine or in the Holy Scripture that says we have to hate our Muslim brothers and likewise.”

The interfaith dialogue was attended by several personalities like Aleem Habib Sharief of the Ulama League of the Philippines and Commissioner Talib Abdulhamid Benito of the Bangsamoro Transition Commission (BTC).  A total of 65 participants attended the dialogue of which are 20 are Christians and 45 are Muslims from various stakeholders such as religious leaders, Christian and Muslim youth and community leaders from different places in Lanao Del Sur.

MARADECA representative Farida Salic believes that a dialogue between different sectors is very important for peaceful coexistence between Muslims and Christians.

She also added that respecting each others’ differences should always be observed. The successful event was supported by Caritas Australia.